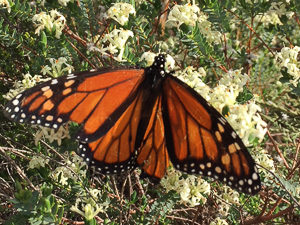 The Wanderer – Danaus plexippus or Monarch, shown here on Pimelea sp. – Rice Flower, is an uncommon and somewhat puzzling visitor to Victoria. According to Museum Victoria’s Butterflies: Identification and Life History:

…. In northern Australia the food plants are widespread weeds but in Victoria Gomphocarpus fruticosus – Swan Plant is grown more as a garden ornamental.

….. It is known as the Monarch in North America where it is noted for its large, long-distance migrations to overwintering sites in California and Mexico. Some limited migration also occurs in Australia and small overwintering colonies are known from SA and near Sydney.